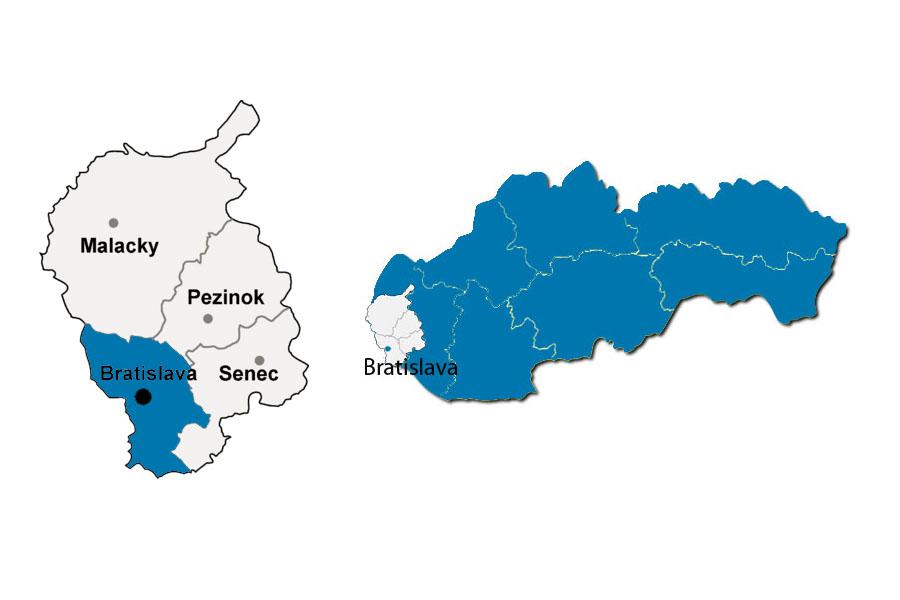 The history of Bratislava spans more than two millennia. From 1291 a free royal town, for 300 years it was honoured as the coronation town of the “Hungarian” kings. Bratislava enjoys a number of “firsts” over other towns in Slovakia – Academia Istropolitana, the first University of the Humanities, was founded here by King Mathew I Corvinus (1465); it has the oldest town hall (15th century); the Rococo Apponyi Palace houses collections of the oldest city museum (1868); the oldest park in Central Europe, today’s Janko Kráľ’s orchard on the right bank of the Danube, was opened in 1776. The beauty of historical Bratislava is complemented by its magnificent aristocratic palaces and burgher houses – Mirbach’s and Pálffy’s Palaces with displays of the Bratislava City Gallery, the Primate’s Palace – the residence of Bratislava’s mayor, and cultural institutions – the Slovak National Theatre historical building (1886) and Reduta housing the Slovak Philharmonic.

The Gothic St. Martin’s Cathedral, Franciscan Church, the Church of the Clare Nuns and the Art Nouveau Blue Church are among its precious sacred buildings. Other places of interest in the city are the Red Crayfish Pharmacy (16th century), the Rococo House of the Good Shepherd with its exhibition of historical clocks. Bratislava’s attractions are its three historical squares linked by old romantic streets. Their delightful cafés, wine bars with a chance to sample the local wines or restaurants with national and world cuisine provide refreshment after an exhausting day spent touring. The city’s surroundings are also attractive with Devín castle, the Danube banks and the forest park on the south-facing slopes of the Small Carpathians – these all enhance the charm of Bratislava, which fully deserves its epithet as the “Beauty on the Danube”.

Bratislava, the metropolis of Slovakia, is one of Europe’s youngest capitals. It is the political, business, cultural and educational centre of Slovakia, with 431,061 inhabitants and is filled with young people, thanks to its eleven universities. Its streets are crowded with tourists and businessmen alike, it is a prosperous venue close to two other capitals, Vienna and Budapest, which are also to be found on the Danube.

Bratislava, renowned as a city of culture, keeps this status to the present day, as is borne out by the presence of 20 museums, 80 galleries, theatres headed by the Opera of the Slovak National Theatre which attracts music enthusiasts from all over the world. Its musical tradition associated with Mozart, Beethoven, and Liszt continues in its prestigious international festivals – Bratislava Music Festival, Bratislava Jazz Days and Cultural Summer in the streets of the city. Bratislava is currently experiencing a building boom. The face of the city is being enhanced with new prominent features of modern architecture, luxury

Bratislava City Card offers discounts to all visitors of the Slovak capital and enables everyone to experience the best of what Bratislava has to offer. A detailed list of discount providers along with information on individual discounts can be found in the enclosed PDF-brochure below.

Free unlimited travel on the public transport network in the zones 100+101 (trams, trolleybuses, bus lines 20 – 799, night lines N21 – N99 and train routes S)
Free hour-long walking city tour in Slovak, English, German, Spanish, Italian and French
Free trilingual guide for the card holders
Special offer for families with children
Children up to 15 years of age are entitled to join the guided walking tour for free when accompanied by their parents – holders of the Bratislava City Card.